The census is a count, and account, of Ireland’s population on Census Night. By law, everyone in the country on that night must be included on a census form. Census night takes place on Sunday 3rd April 2022.

The census is organised by the Central Statistics Office (CSO). The CSO employ a temporary field force of 5,600 people to help carry out the census at local and regional level.

Census forms are distributed to every household and communal establishment (e.g. hotels, hospitals) by Census Enumerators, who also collect the completed census forms. If in doubt, all Census Enumerators carry ID cards and will produce them on request.

Everybody present in the country on Census Night must be included. This is the law. The legal basis for the data collection is provided by the Statistics Act 1993, the Data Protection Act 2018, and the Statistics (Census of Population) Order, 2020.

As a resident of Clann, we would like to draw your attention to ‘Household Question 2 – If renting, who is your landlord?’, residents should mark option 3 rent and option 3 Voluntary/Co-operative housing body. 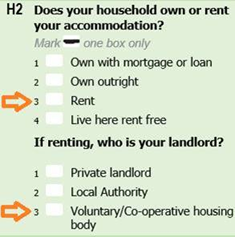 For further information on the Census, please visit www.census.ie/

Please accept marketing-cookies to watch this video.
Please refresh this page after you change your cookie settings to watch the video.
X